Rep. Eric Swalwell understands the role that dedicated public servants can play to address gun violence and that doing so requires all Americans to come together and fearlessly advocate for sensible gun laws. Rep. Swalwell was a crucial supporter of the Bipartisan Background Checks Act of 2019 and the Enhanced Background Checks Act of 2019, helping to usher these important bills through the House Judiciary Committee. He also introduced H.R 1287, the No Guns for Abusers Act, which requires that all domestic abusers, or those subject to a domestic violence protective order, surrender their guns to local authorities. Rep. Swalwell continues to demonstrate his commitment to fighting gun violence in all its forms, including the dangerous trend of gun extremism and the need to ban weapons of war in our communities. He is unafraid to take action.

The Brady Campaign is proud to endorse Rep. Eric Swalwell for re-election to the U.S. House of Representatives. 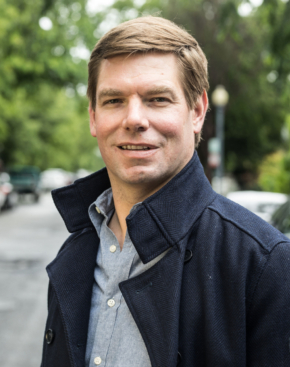