Having lost his father to gun violence, Rep. Steven Horsford knows all too well the pain of losing a loved one to gun violence.Rep Horsford joined the Gun Violence Prevention Task Force when commencing official Congressional duties, promising to fight for common-sense gun violence prevention laws. Rep. Horsford stresses the importance of funding gun violence prevention programs for communities of color, where residents are disproportionately affected by gun violence. Rep. Horsford calls for Democrats and Republicans to unite on common-sense gun reforms like universal background checks and bans on high-capacity magazines and assault weapons.

“I’m very proud to have earned the endorsement of Brady. Our nation is dealing with a gun violence epidemic. Nevada, in particular, is among the deadliest states for gun fatalities and experienced the largest mass shooting in American history. I know firsthand what it means to lose a loved one to gun violence and how it negatively impacts our children, families, and communities. I will do everything I can to pass and enact gun safety legislation in the House of Representatives." 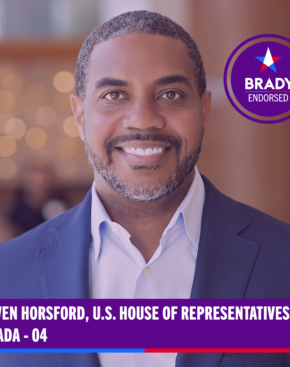