Election 2020: The Major Wins We’re Celebrating in the Movement to End Gun Violence 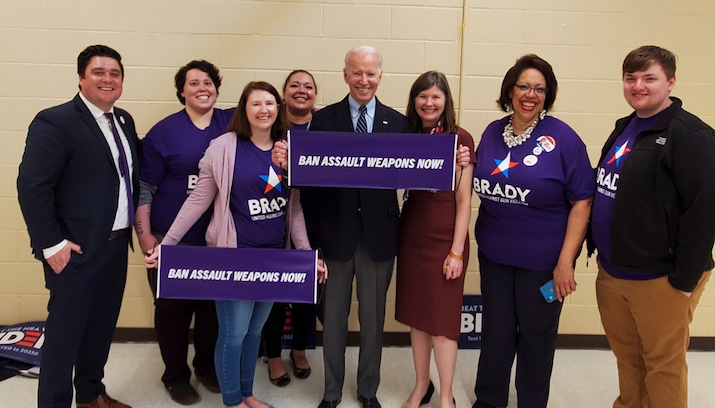 Americans across the country voted at record levels to oust NRA-backed Donald Trump and usher in a safer future.

After four years of lethal failures to address gun violence in this country, we won the White House back from the NRA and gun lobby. Now that Joe Biden has been elected President of the United States, our country is on a path to prevent gun violence and save lives. He and Vice President Kamala Harris, both proven gun safety champions, will put an end to Donald Trump’s four years of lethal inaction on gun violence. A Biden-Harris administration will empower our country to finally make lifesaving change through both legislative and executive action. I see a path forward for a safer America, where we do not have to fear getting shot and killed as we go about our daily lives.

Make no mistake, this election has been a referendum on Donald Trump’s lethal inaction toward gun violence. This is a proud day for America, and we are recorrecting our nation's course. President-elect Joe Biden and Vice President-elect Kamala Harris will lead with integrity, compassion, and conviction to put the American people first.

Our win in the White House is part of a larger trend across the country this Election Day, where voters cast their ballots at record levels and ousted NRA-backed politicians, delivering wins for our safety from gun violence. I am thankful for the grassroots power of our movement and the work of our longtime Brady activists that made these gains possible.

Please join me in savoring these gun violence prevention victories as we prepare to get to work for a safer America for us all.

1. We turned out to vote at record-levels, proving gun violence prevention is a winning issue.

The numbers speak for themselves: With a total vote margin of 4 million and growing, Joe Biden has garnered the most votes for a presidential candidate in U.S. history. This is the will of the people. Even amid a global pandemic and Trump’s concerted efforts at voter suppression, Americans went to the polls like never before because we demand better for our country. Voter turnout reached 67%, the highest it’s been in 120 years. Those historic votes represent overwhelming support for what has been the strongest gun violence prevention presidential platform we have ever seen in this country. The record turnout in 2020 was propelled by our nation’s youth — like the young leaders of Team ENOUGH — and voters of color, who continue to lead us toward a safer, more just America.

Youth voter turnout was historically high in this election- but the story doesn't start or stop there. Young organizers like @AalayahEastmond and groups like @concernedofdc have been on the ground fighting for a safer America for all of us. https://t.co/Y36YbkTI6R

Let’s be clear, Joe Biden and Kamala Harris have won a historic popular vote because the American people have had enough of Donald Trump and his failure to act on the gun violence epidemic in America. Poll after poll shows upwards of 90% percent of Americans want stronger gun laws, like universal background checks and a federal assault weapons ban. Yet, Trump has done nothing but pander to the NRA and gun lobby, refusing to listen to the American people and take up common-sense gun reform. While we are still patiently awaiting final results, we know that a Biden-Harris administration will put people over profits and take immediate, meaningful action to address America’s gun violence epidemic. (Read the Brady Campaign’s executive action plan.)

I am so excited to pick up the work of Jim and Sarah Brady and reunite with President @JoeBiden to pass common-sense gun reform policies to prevent gun violence and save lives. #EndGunViolence #BidenHarris2020 @bradybuzz https://t.co/qCnbHCEWIc

2. We protected our hard-won gun violence prevention majority in the U.S. House of Representatives.

VICTORY: We protected our hard-won gun safety majority in the U.S. House. Take a minute savor this one.

This victory builds upon our historic gains in the 2018 elections. Our champions in the House will continue to make gun violence prevention a priority! #Election2020 pic.twitter.com/vV419jTXoO

3. We flipped NRA-backed seats in the House, Senate, and state legislatures.

We flipped two key seats in the Senate: gun safety champions John Hickenlooper (D-CO) and Mark Kelly (D-AZ) won seats that were previously held by NRA-backed senators. And, we flipped two seats in the House: Deborah Ross (NC-02) and Kathy Manning (NC-06). We also ousted NRA-backed politicians in statehouses. In Delaware, voters elected Spiros Mantzavinos (District 7) and Kyle Evans Gay (District 5), sending a gun safety supermajority to the Delaware Senate. It is clear this election has been a referendum on NRA-backed politicians at every level. Across the country, voters showed that they see through the NRA’s lies and corruption and voted for candidates who are committed to protecting our lives.

Americans voted like never before, and we're taking our country back from the grips of the gun lobby. #BidenHarris2020 #EndGunViolence pic.twitter.com/EjR4w356my

4. We endorsed more gun violence prevention champions than ever before.

I am so proud that Brady was able to endorse more gun violence prevention champions than ever before, a record 200 candidates across the country. This bipartisan cohort contains the most diverse candidates that we have ever had the honor of supporting: 48 candidates of color, eight LGBTQIA identifying candidates, and 57 women. Our motto at Brady is “Take Action, Not Sides,” and we did just that — reaching across the aisle to endorse Rep. Chris Smith (NJ-04) and Rep. Brian Fitzpatrick (PA-01), whose records illustrate the fact that preventing gun violence is not about partisanship, but about saving lives.

All four of our Million Mom March candidates won their elections! Rep. Madeleine Dean (PA-04), Rep. Carolyn Maloney (NY-12), Rep. Marie Newman (IL-03), and Rep. Mary Gay Scanlon (PA-05) will all continue the legacy they started 20 years ago when they mobilized for the historic Million Mom March. These are the moms who created the first national chapter-based gun violence prevention organization — which later merged and became a part of Brady.

To date, more than 15 Million Mom Marchers have served in Congress — and we are proud to celebrate these four victories this election cycle! These inspiring leaders have prioritized gun violence prevention over the past two decades. They are fighting for young people across the nation — ensuring that no child in America has to grow up in fear of being shot at school, work, the mall, or in our own homes or neighborhoods.

She was a part of the historic Million Mom March, which later merged with Brady. In the 20 years since, her dedication to gun safety has never wavered! #Election2020 pic.twitter.com/YT0caUqOtB

6. With the passage of Proposition 17 in California, we restored voting rights and built a more representative democracy — especially for communities most impacted by America’s gun violence epidemic.

California passed the landmark proposition that allows Californians with previous felony convictions who are on parole to vote. This move enfranchises 50,000 parolees to make their voices heard in our elections and is essential to a fair democracy. We know that we cannot prevent gun violence without everyone’s equal participation in our democracy, and the passage of Proposition 17 is an essential step forward in this fight.

This is a win for racial justice in California, too, and one that I hope the rest of the country will see and follow suit. Because Black communities are disproportionately impacted by the carceral state, policies created to disenfranchise the formerly incarcerated often disenfranchise Black citizens. In fact, three out of four men leaving California prisons are Black, Latino, or Asian American, according to the California Department of Corrections and Rehabilitation. Voters in California clearly understand what we know to be true: that racial justice is inextricably linked to a representative democracy and preventing gun violence.

Congrats, @CoryBooker! On behalf of all of @bradybuzz, I am thrilled to welcome you back to the Senate. Thank you for fighting for us! #EndGunViolence #Election2020 https://t.co/XL3dQCAasQ pic.twitter.com/DX8Q7XfS4h

7. We re-elected some of the most ardent and passionate gun violence prevention champions we’ve ever had.

From the bottom of my heart: thank you, @fred_guttenberg.

Before anyone else, you were outspoken on this. From the gate, you believed that we as a country had the power to elect @JoeBiden. Thank you giving us the confidence we needed in ourselves. #BidenHarris2020 @bradybuzz https://t.co/HzLlNvF5wH

I hope we each take a long moment to celebrate and savor these wins. Because we earned them! We have delivered these monumental successes after decades and decades of hard work.

For Brady, that work gained momentum on that unforgettable March morning in 1981 when a bullet tore through Reagan White House Press Secretary Jim Brady’s head, changing the course of the movement against gun violence. As a senator, Joe Biden passionately joined Jim and Sarah Brady in shepherding the bipartisan Brady Bill through Congress and passing a federal assault weapons ban. Alongside Brady, Joe Biden has proven he can take on the NRA and win.

Now that voters have selected Joe Biden and Kamala Harris to lead us, we can move forward to a stronger future. It’s time for Americans to unite from coast to coast, red and blue, young and old, fed up and fired up, to honor the will of the people and move toward swearing in our new President. It’s in our hands.

Donate Now and Your Gift Will Be TRIPLED

Your donations will fund dedicated resources toward our ambitious plans to pass lifesaving gun reform under a Biden-Harris administration.