“Since arriving in the U.S. Senate a decade ago, Sen. Coons has demonstrated his commitment to making Delaware, and the rest of the country, safer by preventing gun violence. Sen. Coons has worked tirelessly to bring common-sense gun safety and violence prevention policies to the Senate floor. Recently and importantly, Sen. Coons has been an important voice in the effort to pressure Senate Majority Leader Mitch McConnell to bring H.R.8 and H.R.1112, two bipartisan bills passed by the U.S. House of Representatives that would expand and strengthen background checks, up for a vote.” 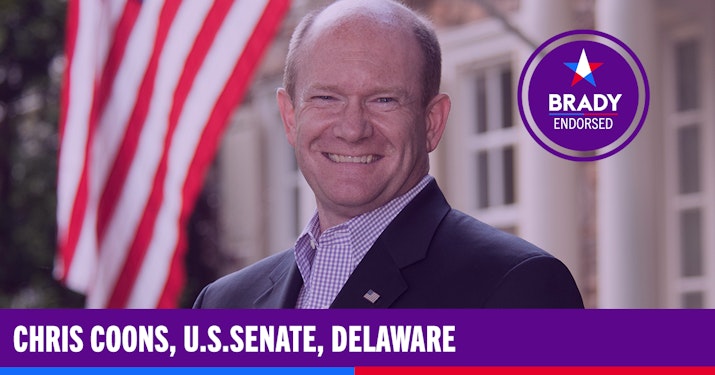 Sen. Coons has worked across the aisle in the U.S. Senate to construct and pass common-sense gun policies. He is the lead Democratic sponsor of S.875, the NICS Denial Notification Act of 2019, a bipartisan bill that would require the National Instant Criminal Background Checks System to notify local and state police when a prohibited purchaser attempts to buy a gun. Senator Coons is an outspoken advocate for research funding for gun violence, which was included for the first time in over 20 years in the FY2020 appropriations bill. Sen. Coons is also the a co-sponsor of several critical pieces of gun safety legislation, including: the Background Check Expansion Act (S.42) an Assault Weapons Ban (S.66), the Protecting Domestic Violence and Stalking Victims Act (S.120), the Gun Violence Prevention Research Act (S.184), the Extreme Risk Protection Order Act (S.504), and the 3D Printed Gun Safety Act (S.1831).

"For too long our nation has faced an epidemic of gun violence in our streets, our schools, our public spaces, and our places of worship. We must do more to strengthen background checks, take weapons of war off of our streets, limit the sale of high capacity magazines, and give law enforcement better tools to ensure that weapons do not remain in the hands of those who shouldn't have them. I have voted and led efforts to do just that, and I remain committed to building coalitions that will pass laws that address gun violence."

Given the urgent need for federal action to reform our nation’s gun laws and to reduce gun violence, Brady will continue to issue endorsements for the U.S. House of Representatives, U.S. Senate and state and local offices ahead of the 2020 elections.