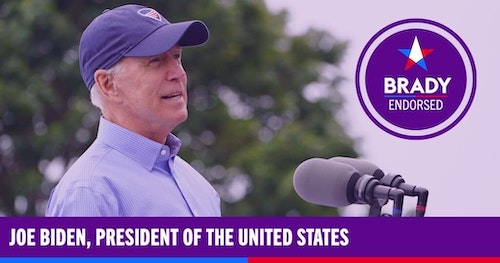 Washington, D.C., March 8, 2020 - Today, Brady endorsed Joe Biden for President. This is only the second time that Brady has endorsed a candidate in a presidential primary.

“Throughout his time in public office, Joe Biden has worked tirelessly on behalf of the American people to create a safer and more prosperous nation to leave to our children. Nowhere is this more evident than in his deep and consistent commitment to ending gun violence in the United States. As a senator, Joe Biden worked with Jim and Sarah Brady to pass the landmark Brady Bill, which established our nation’s Brady Background Check system. In doing so, he saved countless lives: to date, Brady Background Checks have stopped more than 3.5 million prohibited gun sales. He championed and helped pass the federal assault weapons ban, a policy that saved lives and that he has pledged to reinstate as President. He sponsored the Violence Against Women Act (VAWA), creating a seachange in the way in which our nation thinks about intimate partner violence. In 2005, he understood the damaging policies in the Protection of Lawful Commerce in Arms Act (PLCAA) and voted against giving unprecedented legal protections to the gun industry.

In the Obama-Biden Administration, Vice President Biden was instrumental in working with President Obama after the mass shooting at Sandy Hook Elementary School in Newtown, Connecticut, to develop actions that could keep Americans safe while the U.S. Senate refused to act. His work helped to narrow background check loopholes, prevent illegal gun trafficking, and expand funding for access to mental health resources.

Vice President Biden’s solutions are the comprehensive approach needed to end gun violence in all its forms. His proposals will address violence against women, close background check loopholes to keep guns out of dangerous hands, and focus on community violence — investing in communities disproportionately impacted by gun violence, often communities of color. He is the champion we need to end our country's gun violence epidemic.

At a time when our politics are polarized and people are looking for answers, Joe Biden can break through the division and deliver real change. He has proven that he understands that gun violence affects every community and person. There is no other candidate in this race with his record and his commitment to ending gun violence.

Joe Biden has worked with the gun violence prevention movement, with survivors, and with lawmakers his entire career. We know him, and he knows us. We know he will work to deliver this change. Brady is proud to endorse Joe Biden for President.”

During his time as a Senator, Joe Biden was a critical voice in shepherding through both the Brady Bill and the federal assault weapons ban. He is an original sponsor of the Violence Against Women Act. He forcefully opposed the Protection of Lawful Commerce in Arms Act (PLCAA) which gives the gun industry unprecedented protections under law.

Joe Biden’s record and commitment to preventing gun violence is unimpeachable. We need his leadership and vision to help pass comprehensive federal legislation and to act with the full speed and power of the executive.