Brady Endorses Rep. Lucy McBath for Re-Election: A Leader with Vision and Heart

Washington, D.C., February 19, 2020 - Today, Brady endorsed Rep. Lucy McBath (GA-06) in her campaign for re-election to the U.S. House of Representatives in 2020. Rep. McBath has delivered on her promise to not only bring attention to but also to help solve our nation’s gun violence epidemic. Her leadership has made a tangible difference in the effort to address this crisis.

“Rep. McBath has described herself as a ‘mother on a mission.’ That mission is clearly making our country and her district a safer place by preventing gun violence. Through her work, we are pushing closer to that goal. Rep. McBath understands the pain of losing a child to gun violence. She has worked tirelessly before her tenure in Congress and since she arrived in Washington to ensure that no other parent has to endure that, as well. We are so grateful to have leadership like hers representing not only Georgians in the 6th District, but survivors and advocates across the country who feel they have a voice in Congress that represents them. Brady is proud to endorse Rep. McBath for re-election." 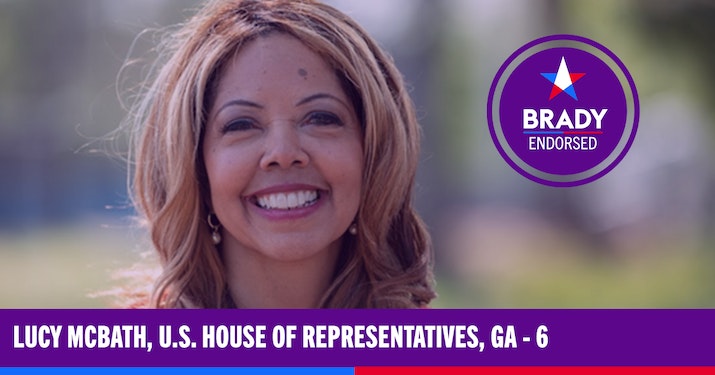 Since joining Congress in January 2019, Rep. McBath has served as Vice Chair of the U.S. House of Representatives Gun Violence Prevention Task Force. She has helped to secure $25 million in funding for federal research into gun violence in last year’s budget deal, the first such funding in over 20 years. She has introduced H.R.3076, the Federal Extreme Risk Protection Order Act of 2019, H.R.5041, the Family Violence Prevention and Services Improvement Act, and H.R.4301, the School Shooting Safety and Preparedness Act.

Rep. McBath was an original sponsor of H.R.8, the first bill passed by Congress to ensure that all firearm transactions are subject to background checks. H.R.8 and the complementary bill H.R.1112, which would close the ‘Charleston Loophole,’ were passed by a bipartisan majority in the U.S. House of Representatives in February 2019, but have yet to receive a vote in the U.S. Senate. Over 34,800 individuals in the United States have been killed by gun violence while Senate Majority Leader Mitch McConnell has refused to bring these bills up for a vote.

“The truth is, gun violence is a threat to all of us. Our schools, movie theaters, and parks should be safe for our kids and families. But unfortunately, outdated and dangerous views like those of my opponent, Karen Handel, put all of us at risk. I am honored to have received the endorsement of Brady, because we are fighting together on this mission."

“When over 100 people a day are killed by gun violence in the United States, it is clear that something needs to change. Rep. McBath has proven that she is able and has begun to create that change."

Given the urgent need for federal action to reform our nation’s gun laws and to reduce gun violence, Brady will continue to issue endorsements for the U.S. House of Representatives, U.S. Senate and state and local offices ahead of the 2020 elections.