Brady Endorses Wendy Davis for Congress: We Need to Stand with Wendy 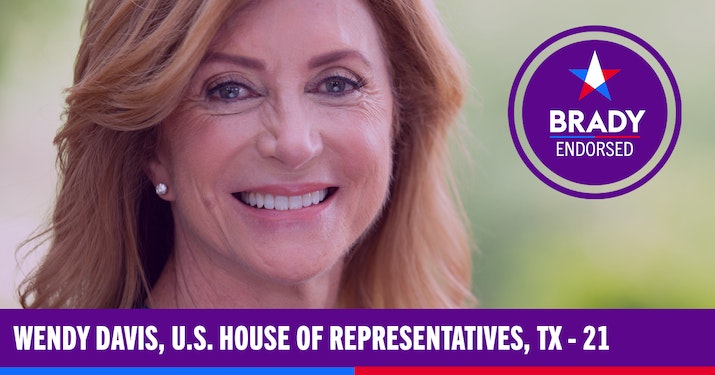 "We need leaders who aren’t afraid to stand by their convictions. Few people know how better to stand than Wendy Davis. She is a champion for commonsense solutions and for all Texans’ rights to live free from the fear of gun violence. She knows that when our children are afraid in their school – and in their communities – that we need action, not talk. We need to stand up and help Wendy Davis go to Washington to fight for the policies that will make all Texans safer."

Davis, who gained national fame for filibustering a bill in the Texas State Senate in 2013, has a proven record of advocating for reasonable gun safety legislation. From the Fort Worth City Council to the Texas State Senate, Davis has consistently advocated for policies that respect the rights of responsible gun owners while closing loopholes like the unrestricted private sale of guns.

"Like so many mama bears and grandma bears across Texas, I am tired of elected officials refusing to pass common-sense gun safety laws like universal background checks that will keep our precious children and grandchildren safe," said Wendy Davis, candidate for Texas' 21st Congressional District. "I don't take a dime of corporate PAC money and I'll never be afraid to stand up to the gun lobby. Texans don’t quit, and I won’t stop until they’ve heard our voices loud and clear."

Furthermore, Davis understands that gun violence isn’t just an epidemic, it’s also an issue that particularly affects women. Davis knows that when an estimated 57 percent of mass shootings involve a domestic or intimate partner, we need to address gun violence to keep our communities and children safer.

Wendy Davis is exactly the ‘Mama Bear’ we need to advocate for gun violence prevention laws in the United States Congress.