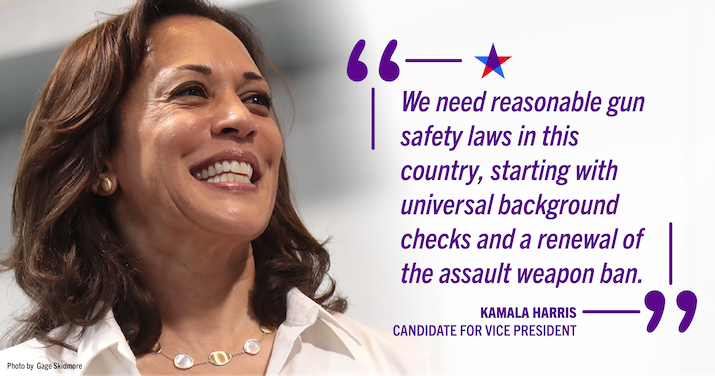 Throughout her career, Senator Harris has championed common-sense solutions to prevent gun violence. A Biden-Harris administration will act swiftly to address our country's gun violence epidemic.

Washington, D.C., August 11, 2020 – Today, the Brady Campaign commends former Vice President Joe Biden’s selection of Senator Kamala Harris for the Democratic nomination for Vice President. Sen. Harris is a trusted, established, and clear champion for gun violence prevention who has shown throughout her career that she is unafraid to have gun safety at the center of her agenda.

“Joe Biden’s choice of Senator Harris for Vice President reflects his clear understanding that the problems our nation faces require strong, informed, and decisive leadership. Brady applauds this selection, as a Biden-Harris Administration will bring both this leadership and needed empathy back to the White House, especially in the effort to prevent gun violence. Throughout her career, Senator Harris has shown that she will act to prevent gun violence and keep our communities safe. From championing both common-sense and innovative gun safety policies as California Attorney General while holding gun manufacturers accountable for profiting off of violence to demanding federal action on gun violence as a United States Senator, Sen. Harris has shown that stopping gun violence is a priority. It is why she introduced a plan to use executive authority to strengthen our nation’s gun safety regulations early in her presidential campaign last year. She understands that, when over 40,000 Americans a year die from gun violence, this issue is too pressing to wait. We need action, not words, and a Biden-Harris Administration will not hesitate to act to make our communities safer.

Brady is proud to enthusiastically support Sen. Harris’ selection for Vice President. We need her voice in this fight.”

A Biden-Harris Administration will not hesitate to enact lifesaving solutions to prevent gun violence. On November 3, we can take our country back from the grips of the gun lobby. #VPPick #EndGunViolence https://t.co/OZqQqehfS0

Sen. Harris has championed gun violence prevention at every opportunity, from her time as a District Attorney, as Attorney General, as a U.S. Senator, and during her campaign for the Democratic nomination for President. In that campaign, Senator Harris was steadfast in her commitment to ending our nation’s gun violence epidemic, including taking executive action to improve our nation’s gun safety laws within the first 100 days. As Attorney General, Sen. Harris championed implicit bias and procedural justice training for law enforcement while supporting efforts to remove firearms from persons who are legally not allowed to have them. She continued these efforts in the U.S. Senate, where Senator Harris has strongly advocated for comprehensive gun violence prevention reform as a member of the Senate Judiciary Committee, helping to draw attention to the Senate’s dangerous lack of action on gun violence and putting forward proposals to help make our nation safer. As Vice President, Senator Harris would bring this same zeal and understanding to preventing gun violence, helping to close existing loopholes in our laws, create new regulations to keep guns out of the hands of individuals who should not have them, and hold gun manufacturers accountable for profiting off of violence in our communities.

“As Vice President, we know that Senator Harris will demonstrate how her deep and detailed understanding of our nation’s gun violence epidemic translates into action to make our country safer. She recognizes the scale and scope of this issue. She has proven that she is unafraid to act. Brady is delighted to see that she will bring this same clarity of purpose as Vice President.”