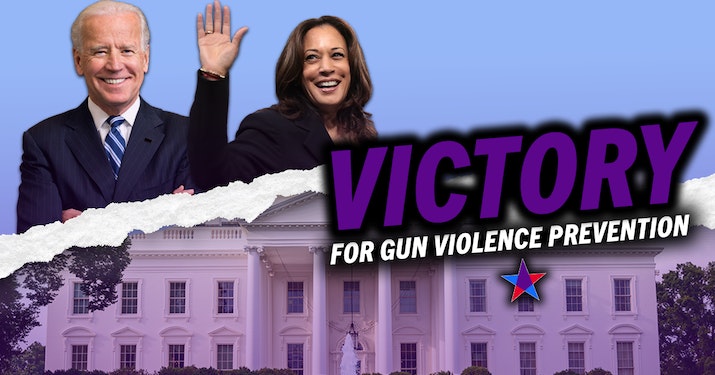 Washington, D.C., November 7, 2020 - Today, Brady hails Joe Biden’s election to become our next President. President-Elect Biden will work to restore decency to the White House and build on the people-first agenda that his campaign has consistently championed. A Biden-Harris Administration returns our government to one that is responsive to the needs and realities of the American people.

“Joe Biden’s victory shows that the voice of the people cannot be stopped. Despite a deadly pandemic, threats of armed intimidation, systemic efforts to suppress and reject votes, and a host of disinformation, Americans have voted in record numbers to elect Joe Biden and Kamala Harris and, in so doing, have endorsed the most comprehensive gun violence prevention agenda in American history. This is a victory for the grassroots activists and concerned citizens across the country who’ve worked for four years to get out the vote and build support for the people-first policies and agenda that Joe Biden will enact.

This win shows that public support for sensible, life-saving gun policies has never been higher. The American people have had enough of thoughts and prayers, and want leaders to enact real, lifesaving change to address the epidemic of gun violence.

Joe Biden and Kamala Harris are those leaders. The Biden Plan to Prevent Gun Violence is the most comprehensive gun violence prevention agenda of any incoming Administration. They will work to create an America in which all families and communities are safe from gun violence, and the right to live is protected more than gun industry profits. While the gun lobby and its allies will continue to fight against these life-saving policies, the Biden-Harris administration will not hesitate to act to stop the public health and safety crisis posed by gun violence. And, Brady will support these efforts every step of the way.

Today is a new day for America and we will continue to fight for needed, life-saving gun violence prevention reforms across Congress, courts, and communities in the coming months and years. We are proud to again have a partner in the White House who will fight alongside us.”

About Brady’s Work in the 2020 Election:

In the 2020 election, Brady has endorsed a historic number of gun violence prevention candidates up and down the ballot across the country, a clear reflection of this issue's importance to all Americans. The Brady Campaign has endorsed more candidates this year than in any election in its history, helping to champion common-sense candidates and their life-saving solutions. This election, the Brady Campaign not only endorsed the most candidates ever, but as well the most diverse set of candidates ever. From 57 women to 19 veterans, and from eight LGBTQIA identifying persons to 48 candidates of color, this cycle’s candidates represent a broad swath of all Americans, bringing their voices and perspectives to the halls of power.

During his time as a Senator, President-Elect Joe Biden was a critical voice in shepherding through both the Brady Bill and the federal assault weapons ban. He is an original sponsor of the Violence Against Women Act. He forcefully opposed the Protection of Lawful Commerce in Arms Act (PLCAA) which gives the gun industry unprecedented protections under law. As Vice President during the Obama-Biden administration, Vice President Biden was tasked with developing and implementing common-sense policies to keep Americans safe while the U.S. Senate refused to pass comprehensive legislation. Vice President Biden’s work helped to close loopholes and expand resources for Americans.

Sen. Harris has championed gun violence prevention at every opportunity, from her time as a District Attorney, as Attorney General, as a U.S. Senator, and during her campaign for the Democratic nomination for President. In that campaign, Senator Harris was steadfast in her commitment to ending our nation’s gun violence epidemic, including taking executive action to improve our nation’s gun safety laws within the first 100 days. As Attorney General, Sen. Harris championed implicit bias and procedural justice training for law enforcement while supporting efforts to remove firearms from persons who are legally not allowed to have them. She continued these efforts in the U.S. Senate, where Senator Harris has strongly advocated for comprehensive gun violence prevention reform as a member of the Senate Judiciary Committee, helping to draw attention to the Senate’s dangerous lack of action on gun violence and putting forward proposals to help make our nation safer. As Vice President, Senator Harris will bring this same zeal and understanding to preventing gun violence, helping to close existing loopholes in our laws, create new regulations to keep guns out of the hands of individuals who should not have them, and hold gun manufacturers accountable for profiting off of violence in our communities.

Brady looks forward to working with a Biden-Harris Administration to make this plan a reality and to end gun violence.