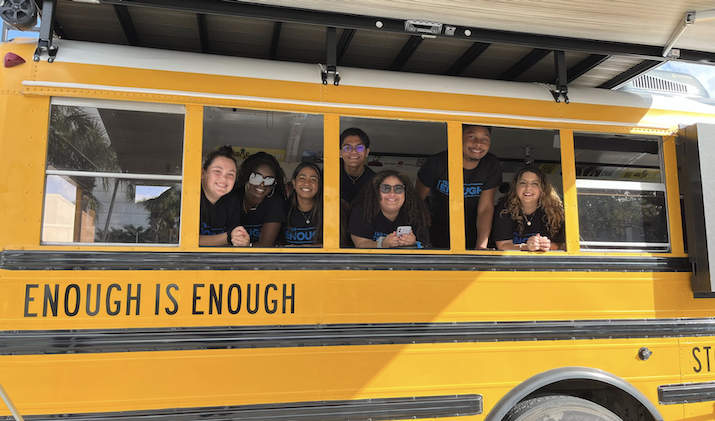 The Get Out The Vote (GOTV) bus tour, led by Parkland survivors, urges Floridians to use their votes to end gun violence in their state and across the country.

Washington, D.C., November 8, 2022 – Today, Brady’s youth program Team ENOUGH, Change the Ref, and other gun violence prevention advocates are embarking on a Get Out The Vote (GOTV) bus tour through Florida, urging Floridians to use their votes to end gun violence in their state and across the country.

Participants include Team ENOUGH founders Aalayah Eastmond, a survivor of the Marjory Stoneman Douglas High School shooting in Parkland, and Robert Schentrup, whose sister Carmen was killed in the same shooting, as well as Change the Ref’s Manuel and Patricia Oliver, whose son Joaquin was also killed. They are making it clear that in this election, Americans have the opportunity to better protect their children and communities and demonstrate that gun violence prevention is a winning issue.

We have officially kicked off our #GOTV Gun Violence Prevention Bus Tour in Florida with @ChangeTheRef and @bradybuzz. 🌴

Follow our #GOTVFL tour on our socials all day and make sure to #VOTE! pic.twitter.com/5JzRSxgbkR

The tour will begin in Parkland before scheduled stops at Florida Atlantic University and University of Central Florida, and will feature remarks by gun violence survivors including U.S. House candidate Maxwell Frost (FL-10).

While some action was taken after the Parkland shooting, significant gaps remain in gun regulations that would save lives. Each year, 2,849 people are killed by gun violence in Florida, and the state experiences an average of 35 mass shootings per year. Additionally, gun violence has become an increasingly important electoral issue, with about three-quarters of voters saying recent mass shootings made them more likely to vote in the 2022 midterm election.

“We live in a country where children are afraid to walk to school, some are even afraid to go to the bathroom, out of fear of being caught in a school shooting. Guns are now the leading cause of death for children in America, and as the generation that grew up under active shooter drills and lockdowns, we say ENOUGH.

“Generation Z is leading the fight and galvanizing the nation by demanding our politicians answer to the people, not the corporate gun lobby. Today’s tour is a continuation of our work to protect our communities from gun violence. We’re proud to join with the likely first Gen Z Member of Congress, Maxwell Frost, to get out the vote.”

“Team ENOUGH’s tour today reminds Floridians that they have the power to keep their families and communities safe by electing lawmakers who will prioritize gun safety. This year, we saw how the passion and dedication of concerned citizens finally pressured Congress to act and pass the most comprehensive gun violence prevention legislation in decades; we need that same dedication to carry us to our next victory, and that starts at the ballot box.

“I’m proud to work with Team ENOUGH and other advocates to increase the number of gun violence prevention champions in Congress and show voters the power of their votes. The momentum of our movement cannot be stopped.”

“The only way to change the course of gun violence in this country is to elect politicians who will stand with today’s youth, not the gun industry and the NRA. We must take that action today, and vote on behalf of those, like my son, Joaquin, who have had their lives and their voices taken from them by senseless gun violence.”

“Today’s youth is depending on us to deliver on electing politicians who will keep them and their futures’ safe. We cannot fail them.”

This election is SUPER important for the movement against gun violence. Here’s what we’re doing and why. 🧵 pic.twitter.com/jRrylMy0ze