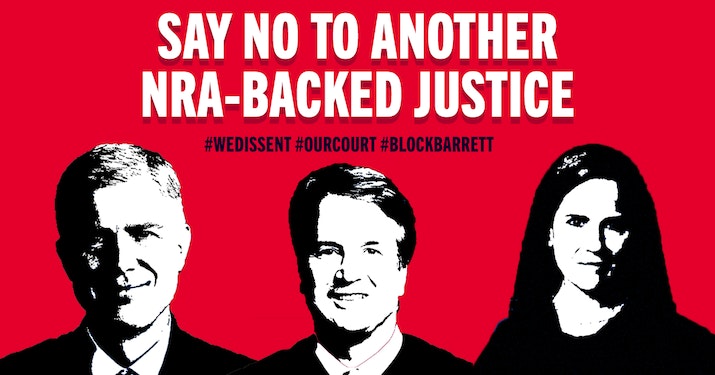 It’s #OurCourt – not Trump’s, and not the NRA's. Our safety is at stake. We’re urging our senators to fight for our futures.

Donald Trump has already stacked the Supreme Court with two NRA picks, and now he is trying to rush through a third. First, the NRA bought Neil Gorsuch’s seat. Then, they bought Brett Kavanaugh’s seat. These ultraconservative, extremist justices have indicated they want to dangerously broaden the interpretation of the Second Amendment.

Urge Your Senators to #BlockBarrett!

If we don’t act now, another NRA-backed extremist could get a lifetime seat on the Supreme Court. Text SCOTUS to 877-877 now and we will patch you through to tell your senators: No confirmation until after inauguration!

Read our memo, "The Case Against the Nomination of Amy Coney Barrett to the U.S. Supreme Court."
Learn More

What's at stake if Mitch McConnell and the Senate rush through Trump's nominee? Put simply, every single common-sense gun law and regulation in America.

As our memo, "The Case Against the Nomination of Amy Coney Barrett to the U.S. Supreme Court," details, every single common-sense gun law in our country would be at risk of being rolled back. That includes state regulations and bans on assault weapons, background checks on gun sales, regulations on open-carry laws around guns in public spaces, laws that keep guns away from domestic abusers, and more. If that's not frightening enough, there's more. Right now, a number of Second Amendment cases are awaiting the Supreme Court.

That means the Supreme Court is poised to issue a ruling that could establish a broader, dangerous interpretation of the Second Amendment.

Read our letter to Senate Leadership

Especially if the Court is packed with yet another NRA-backed justice, we could expect Second Amendment rulings that would empower vigilantes and insurrectionists — which are growing threats in America. This would put all Americans at risk, but it would be especially harmful to communities disproportionately impacted by gun homicide, namely Black Americans, Latinx, and Native Americans.

For months on end now, Trump has been inciting armed militias to mobilize against racial justice protesters. He has even gone so far as to couple these calls for violence and armed insurrection with racist, fearmongering claims of the need to rise up to protect against nonexistent attacks on the Second Amendment. If Trump is able to appoint yet another extremist, NRA-backed Supreme Court justice, then our country will have even less recourse to protect against these growing calls for more access to guns and more violence.

Let's be clear, the NRA bought Trump's presidency, and this Supreme Court seat was exactly what they paid for. In the 2016 presidential election, the NRA paid more than $30 million to elect Donald Trump. They know that by owning the Supreme Court, they will be able to help realize their "guns everywhere" agenda.

If Trump gets his way and the Senate confirms his nominee, we could suffer even more Americans dying from gun violence. In 2020, we have seen gun violence skyrocket to levels not seen in years. Already this year, more than 30,000 Americans have died from gun violence, almost 500 of them children. Approximately 100 people are shot and killed in the United States every day.

It’s simple: The Supreme Court is #OurCourt. We, the people, should get to decide. 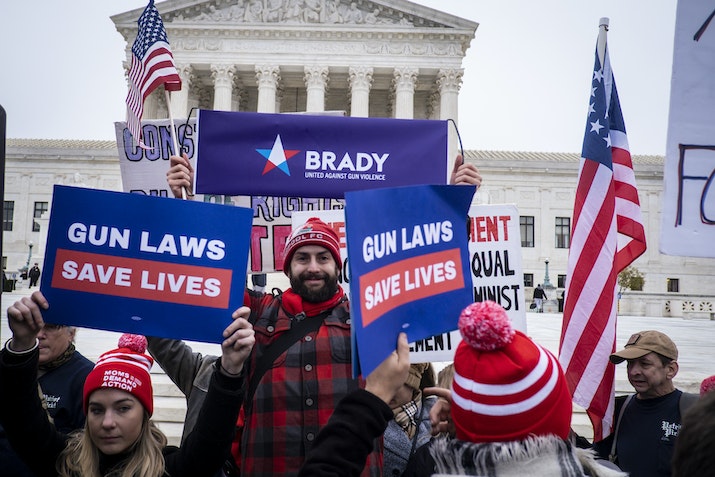 On November 3, the American people are choosing our next president — and that president must be allowed to pick our next Supreme Court justice. That’s what a fair democracy means — that we, the people, get to decide. In fact, polls show that the majority of Americans, including many Republicans, want to choose in November who fills Justice Ginsburg’s seat. We know Majority Leader Mitch McConnell and Chairman Lindsey Graham agree this would be fair and democratic because they’ve said it themselves. Many times over. And we’re holding them to it.

Tell Your Senators: The Supreme Court is #OurCourt. There must be no confirmation until after Inauguration! Call them now at 855-867-4904 or text SCOTUS to 877-877 and we'll connect you!

If we want to stop Trump’s NRA-vision of America from becoming a reality, then we need to band together now and call our senators, no matter where they stand on the issue. Ensuring that we, the people, have a voice in this Supreme Court nomination is literally a matter of life and death. We cannot sit back and let our senators confirm a Supreme Court Justice who will put our lives at risk. Especially ahead of November 3rd, we are counting to fight like hell to protect our democracy and our safety from gun violence. Learn more about our Brady Campaign-endorsed candidates on ballots across America.

Thanks to a generous donor, all donations will be TRIPLE-matched for a limited time. Please make a donation now to bolster our work to fight for our democracy and our safety from gun violence. Thank you for fighting with us!

Urge your Senators to #BlockBarrett! Fill out the information below to receive a phone call that will connect you with the office of one of your Senators.