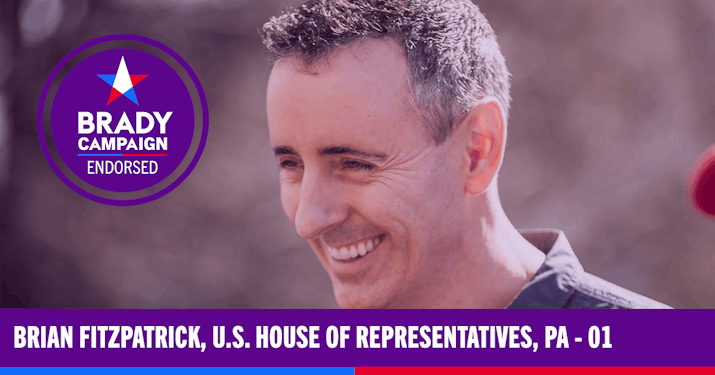 “Rep. Brian Fitzpatrick embodies Brady’s mission to take action, not sides, and has worked to ensure that all Americans can live free from gun violence by prioritizing gun violence prevention solutions over divisive rhetoric. Rep. Fitzpatrick has consistently led on these issues, including as an original co-sponsor for H.R. 8, the Bipartisan Background Checks Act, and co-sponsoring bills such as H.R. 569, the Zero Tolerance for Domestic Abusers Act, co-leading H.R. 1585, the Violence Against Women Reauthorization Act, and H.R. 1236, the Extreme Risk Protection Order Act. Brady is proud to endorse Rep. Brian Fitzpatrick in his campaign for re-election to the U.S. House of Representatives."

"Our nation has witnessed far too many school tragedies caused by gun violence, and the highest responsibility that we have as elected officials and as human beings is to protect our kids. No parent in my district or anywhere in this country should ever have to fear sending their child to school. We must not allow these tragedies to go unanswered. It is incumbent upon all of us to identify the root causes of this violence, put aside partisanship, and work toward solutions to address it immediately so that we can protect all families."

Rep. Brian Fitzpatrick has a demonstrated history of public service. From the start of his career as a Special Assistant U.S. Attorney, then as an FBI agent, and now representing Pennsylvania’s 1st District, he has dedicated his life to serving the people. We are proud to endorse Rep. Brian Fitzpatrick for re-election in the House of Representatives.