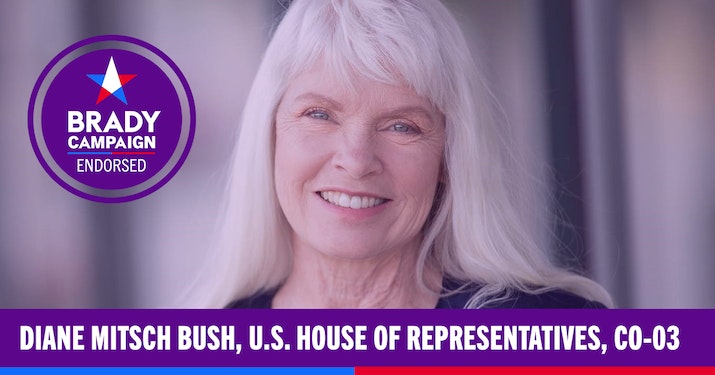 Washington, D.C., September 29, 2020- Today, the Brady Campaign endorsed Diane Mitsch Bush in her campaign for election to the U.S. House of Representatives.

“Diane Mitsch Bush is a strong advocate for the health and safety of all Coloradans, having fought for them at the local and state level. Mitsch Bush worked during her time in the Colorado House of Representatives to expand background checks to enhance safety across the state and protect the lives and livelihoods of all Coloradans. Unlike her opponent, Mitsch Bush has a long history of pragmatic and bipartisan public service, making her both an effective legislator and earning her accolades across the political spectrum. She knows that preventing gun violence doesn’t end with gun safety laws; we must also address the other root causes of violence. Brady is proud to endorse Diane Mitsch Bush for election to the U.S. House of Representatives.”

"I support the Second Amendment. I also believe that we must take steps to keep guns out of the hands of dangerous criminals—including universal background checks. I'm proud that the Brady Campaign has joined me in this fight."