Brady Endorses Jake Auchincloss for Election to the U.S. of Representatives 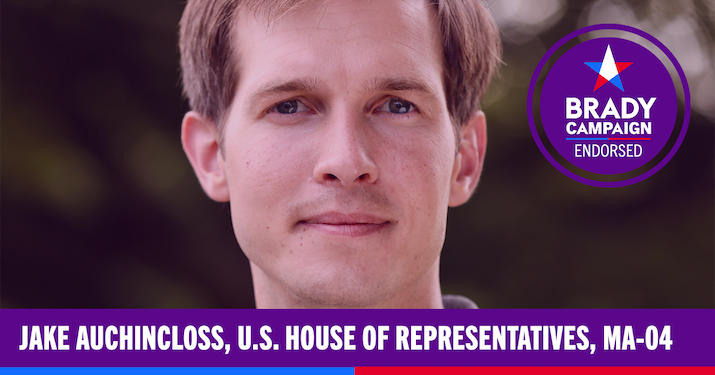 Washington, D.C., October 7, 2020 - Today, the Brady Campaign endorsed Jake Auchincloss in his campaign for election to the U.S. House of Representatives.

“Jake Auchincloss will be a strong leader for gun violence prevention in the U.S. House of Representatives. Auchincloss’ time in the U.S. Marine Corp, coupled with his service on the Newton City Council, has prepared him with a deep understanding of firearms, their role on and off the battlefield, and gun violence prevention policies. We look forward to working with him in Congress, where he will join a growing contingent of military and intelligence veterans who stand for gun safety, recognize gun violence as a public health crisis, and understand that weapons of war have no place in our communities. Auchincloss has the demonstrated leadership, experience, and vision to save American lives from gun violence. Brady is proud to endorse Jake Auchincloss for election to the U.S. House of Representatives.”

“I am so proud to receive the endorsement of the Brady Campaign and to join with them in our shared goal of creating a safer America. As a combat veteran, I know assault weapons are not the ‘arms’ that our Founders had in mind when they wrote the Second Amendment. I will bring those values and that experience with me to Congress as we take on the NRA to make common-sense gun legislation a reality, including: assault-weapon buybacks, mandatory liability insurance for all weapons, Red Flag laws, and universal background checks. I am honored to stand with moms, students, veterans, community leaders, and public health officials to confront the gun lobby and end the American gun violence pandemic.”