Gov. Gretchen Whitmer on Guns, Extremism, and Our Democracy

We sat down with Gov. Gretchen Whitmer to talk about guns, extremism in America, Donald Trump, and the recently foiled plot to kidnap and likely execute her.

"...[T]he whole world saw those pictures of Michigan with these armed protesters and wondered, 'what on earth is happening, that's allowed?'" — Gov. Gretchen Whitmer

Gov. Gretchen Whitmer joins "Red, Blue, and Brady" for a special episode on armed insurrectionism and threats to our democracy.

Listen to the Podcast

Armed intimidation and threats of violence are impacting the very foundation of our democracy — the right to vote and the right to elect leaders who represent the will of the people. This has come to a head in Michigan, where a judge has egregiously blocked a common-sense ban on openly carrying firearms at polling places on Election Day, opening the door for armed voter intimidation amid the state's current unrest. And earlier this month, law enforcement officers announced charges against 14 members of a multi-state domestic terrorist organization that was plotting to kidnap and kill Michigan Governor Gretchen Whitmer.

This horrific reality came on the heels of armed protests at the state capitol in response to coronavirus related shutdowns. However, Michigan is not alone. As recent episodes of the Red, Blue, and Brady podcast have detailed, armed protests have been popping up throughout the country as has armed intimidation and threats against lawmakers who are acting in the interest of their constituents.

Just days before the 2020 election, Michigan Governor Gretchen Whitmer joined Red, Blue, and Brady to talk about how President Trump has incited violence and given credibility to gun extremists who seek to promote insurrectionism and domestic terrorism, as well as what we need to know about voter intimidation as we head to the ballot box.

Read the press release from the Brady Campaign and Michigan Governor Gretchen Whitmer. Listen to more episodes of Red, Blue, and Brady, our Shorty-nominated podcast. 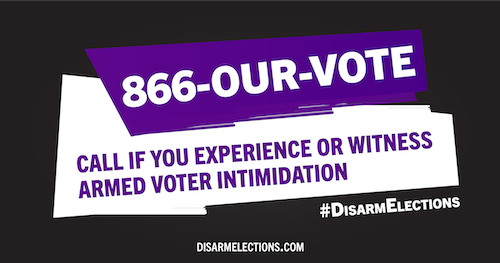